The Zeleninárska association of producers was founded in 2004 and its main purpose was to unite the producers of vegetables, thus creating the marketable capacities that would meet the needs of the growing segment of multiple stores in the region.

The purpose of the association is to increase the presence of producers in the vegetable market.

Since the early 20th century, potato production has been a tradition in the region around the village of Kráľová pri Senci, the home of the core of our association’s members. Therefore, it was potatoes that the members started producing and selling together in the beginning. In 2008, substantial funds were invested in the post-gathering treatment and packaging of potatoes in a joint plant in the village of Kostolná pri Dunaji. In addition to potatoes, the association has since become a major producer of onion, cabbage, garlic, and parsley.

Our association in numbers

The area of potatoes and vegetables 1.870 ha

2015
Zeleninárska association of producers has been acknowledged by the Ministry of Agriculture and Rural Development of the Slovak Republic as an association of producers of onion, cabbage, and root vegetables. It has been assigned the registration number 001/2643/720/2015.
2016
The association successfully launched garlic production and, in cooperation with the ANDACO company, also cabbage fermentation.
2017
We launched an automatic heavy-duty onion peeling machine with a capacity of 380 tonnes.
2018
We are expanding our warehouse capacities, featuring mechanical refrigeration, by 8 000 tonnes.
2019
We are expanding our refrigerated warehouse capacities by 18 000 tonnes and a new root vegetable packer with a capacity of 150 tonnes per day.

Our producers are concentrated in the area of upper Žitný ostrov and the southern part of the region of Považie, in the western part of Slovakia. This area is bordered by the city of Bratislava and the towns of Trnava, Galanta and Dunajská Streda.

This area is characterized by a dry, warm continental climate. From the west, it is sheltered by Little Carpathian Mountains. In this area, the River Danube meets with the River Váh and other minor tributaries. In the 1960s, artificial canals, water bodies and extensive irrigation systems were built that help to draw the irrigation water from these surface water sources. These systems create a unique combination of warm weather and irrigation water with a wide variety of soil types ranging from light sandy to heavier soils. This allows the cultivation of a large variety of high-quality vegetables in this area with a stable yield.

The Zeleninárska association of producers (co-op) supports its growers and leads them to the optimal use of their production potential. The intention is to develop the local community of producers to make sure that soon, 100% of the goods intended for the customers come from domestic production. Similarly, our goal is to expand the range of vegetables produced to fully develop the potential of this location. 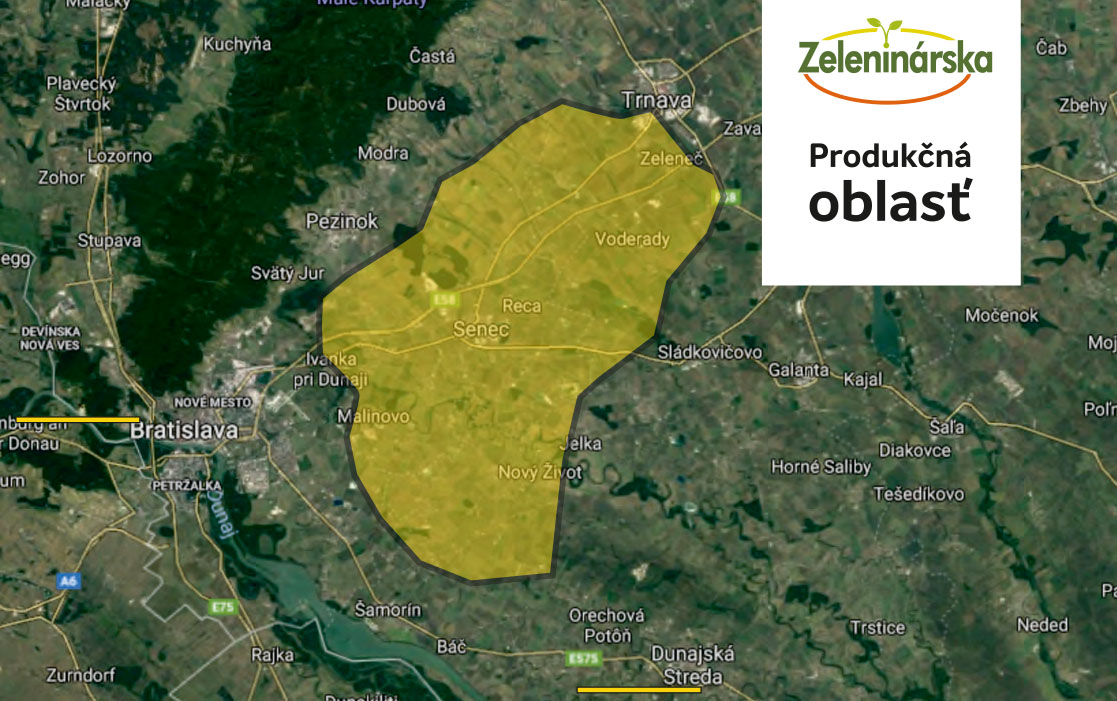 The Zeleninárska association of producers mainly relies on the domestic market in Slovakia and subsequently, the markets in Hungary and the Czech Republic. The association also supplies smaller quantities to Germany and Austria.

Production in tonnes by crop

Storage capacity in tonnes by crop